The Bird Nerds returned to Sandy Hook, New Jersey in mid-August for another day of beach birding.  Unlike our last visit, in mid-May, we are far removed from peak songbird migration, so the variety of birds we saw was quite different.  The shrubby woods that were laden with warblers in May were much quieter in the dog days of August, so we decided to make our way toward the beach, looking for action.  On the walk from the parking lot to the beach, we were treated to some nice view of soaring raptors, including Osprey and Red-tailed Hawk: 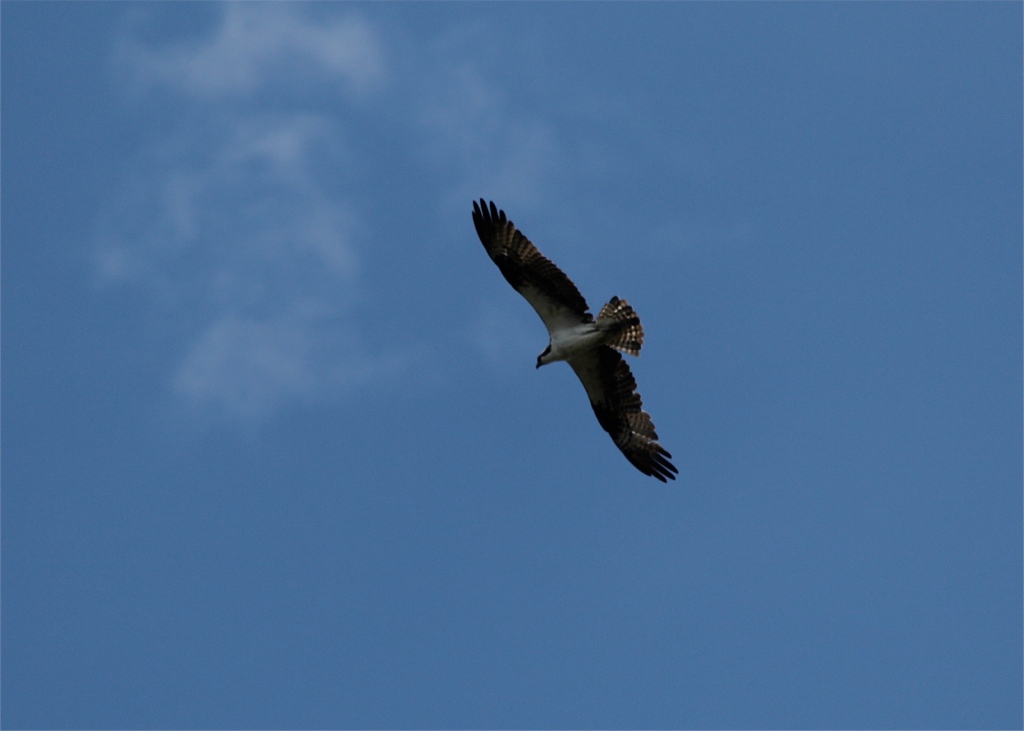 Before reaching the beach, we did manage to lay eyes on Tree Swallows, Northern Mockingbirds, Gray Catbirds, an Eastern Towhee and one of our favorite birds, the Cedar Waxwing, sitting in a (wait for it) cedar tree!

After a walk of about a quarter mile, we left the shrubs and trees behind and entered the beach, which was busy with various gulls and shorebirds enjoying the fine weather:

A Laughing Gull coming in for a landing with various gulls and shorebirds in the background.

American Oystercatcher, enjoying a summer day at the beach.

All was quiet on the shores of Raritan Bay and we were able to identify Herring Gulls, Piping Plovers, Ruddy Turnstones, hundreds of Sanderlings and these four, relatively nondescript shorebirds: 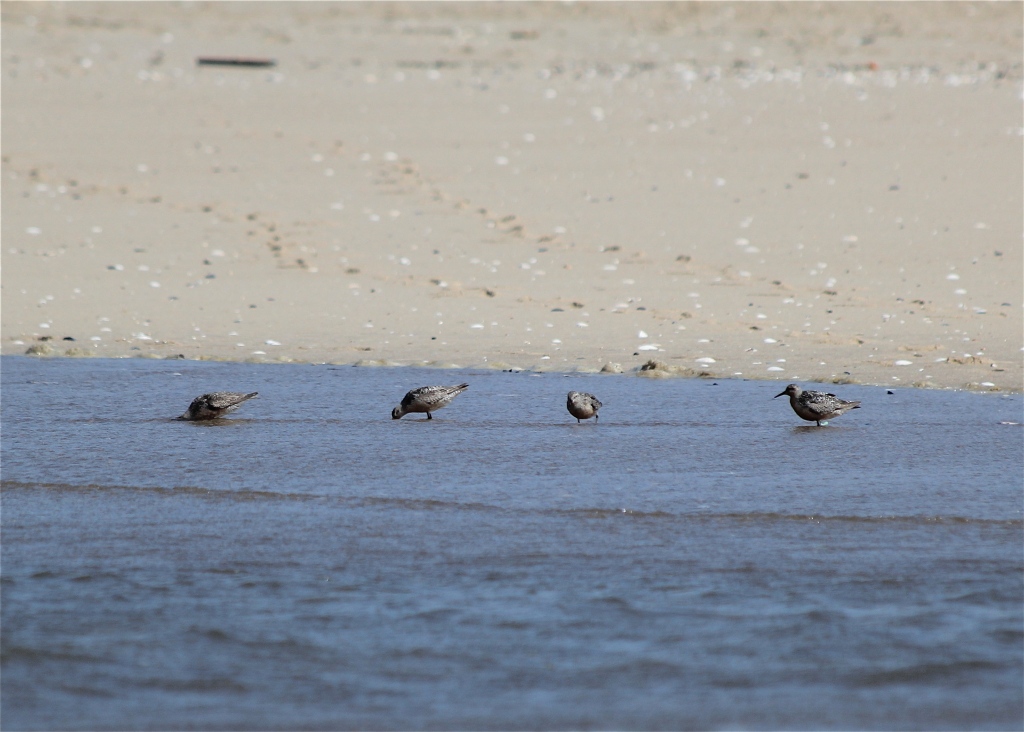 The four loners in the shallows turned out to be Red Knots LL in their non-breeding plumage. This quartet was likely just making a stopover during their migration from their breeding grounds in the high arctic to as far away as the Tierra del Fuego. Red Knots are not listed as endangered, but their numbers are in steep decline, mainly due to the decrease in the abundance of horseshoe crab eggs, which are their primary food source during migration.

All of a sudden, all the birds on the beach took flight en masse and we were afraid that we had done something to spook them.

The avian contents of the beach lifting off as one.

Even this Great Egret took wing:

A Great Egret hightailing it off the beach.

It didn’t take long to realize that it was not us that spooked the birds, but something far more sinister, a Peregrine Falcon:

A Peregrine Falcon on the hunt. I realize the picture is blurry, but this is the fastest creature on Earth, so cut me some slack.

The falcon chased the birds up and down the beach, but wasn’t able to bag a snack.

A grain of Sanderlings (that’s the collective noun, I looked it up) fleeing the falcon. Verrazano Narrows Bridge in the background. Some guy fishing in the foreground.

After the falcon departed, hungry and disappointed no doubt, the birds were able to safely find their way back to the beach, including the Great Black-backed Gull:

As we headed back to the parking lot, we did see one warbler (a prairie warbler) and a not-so-common Broad-winged Hawk.  But on this day, we learned that birds are just like people: when it comes to summertime at the Jersey Shore, all the action is at the beach.