Dedicated readers of the blog know that Sandy Hook, New Jersey is one of our favorite places to bird watch (you can read our first, more detailed post about the area here).  This barrier beach, part the Gateway National Recreation Area, attracts so many species of bird throughout the year that we visit whenever there is an opportunity. The most recent opportunity was Thanksgiving weekend while visiting Sarah’s parents.  The Bird Nerds (with additional nerd Jerry) headed to Sandy Hook on November 30th, to see what Fall brought to the beach.

We explored some new locations this trip, starting at Horseshoe Cove, which is located on the bay side of the peninsula.  Here is a map to give you an idea of the geography: 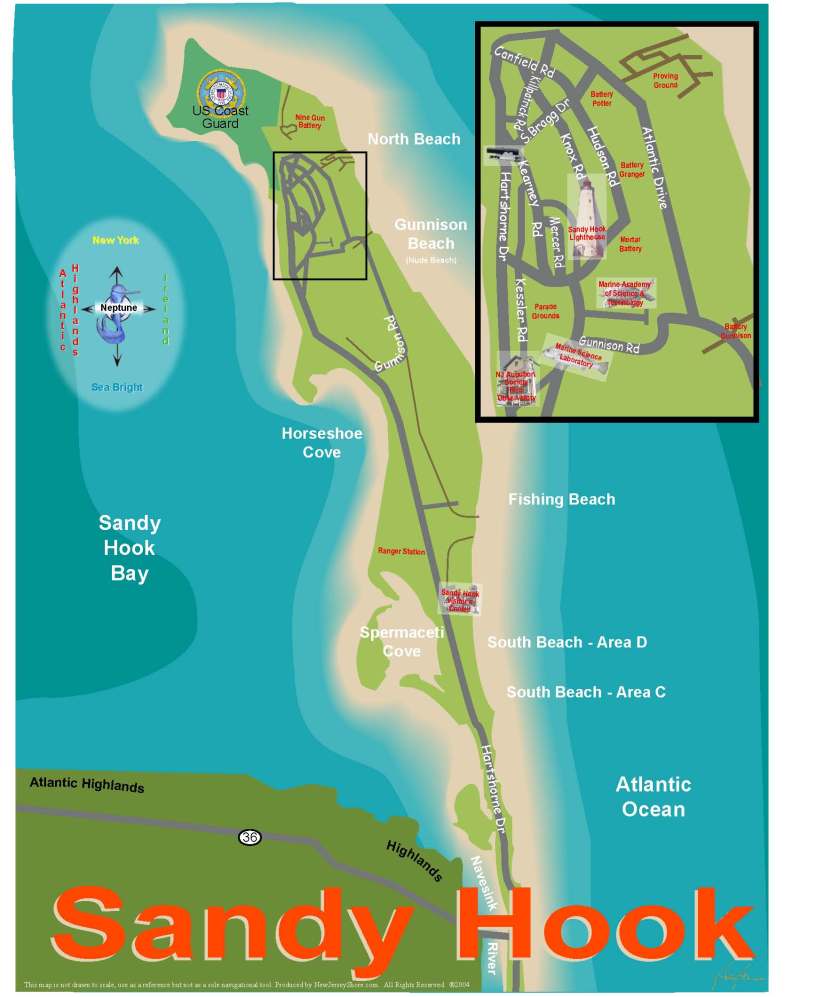 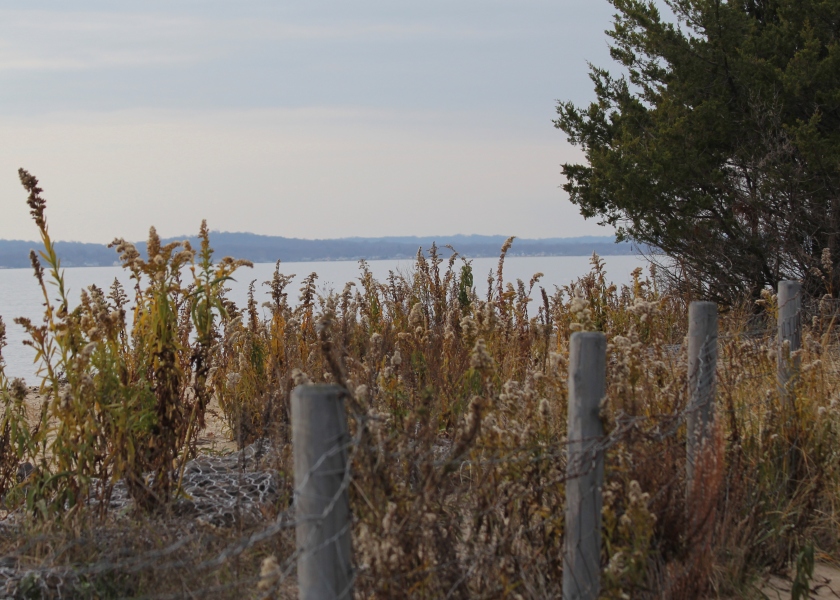 Entering the trail at Horseshoe Cove, we looked up and saw a few Black Vultures perched on a telephone pole.  They look a little ominous, but they are much more attractive than their cousin the Turkey Vulture.  We see the Black Vulture much less frequently than the Turkey Vulture (who you can almost always see soaring above you any given afternoon) because this is the northernmost part of their range. 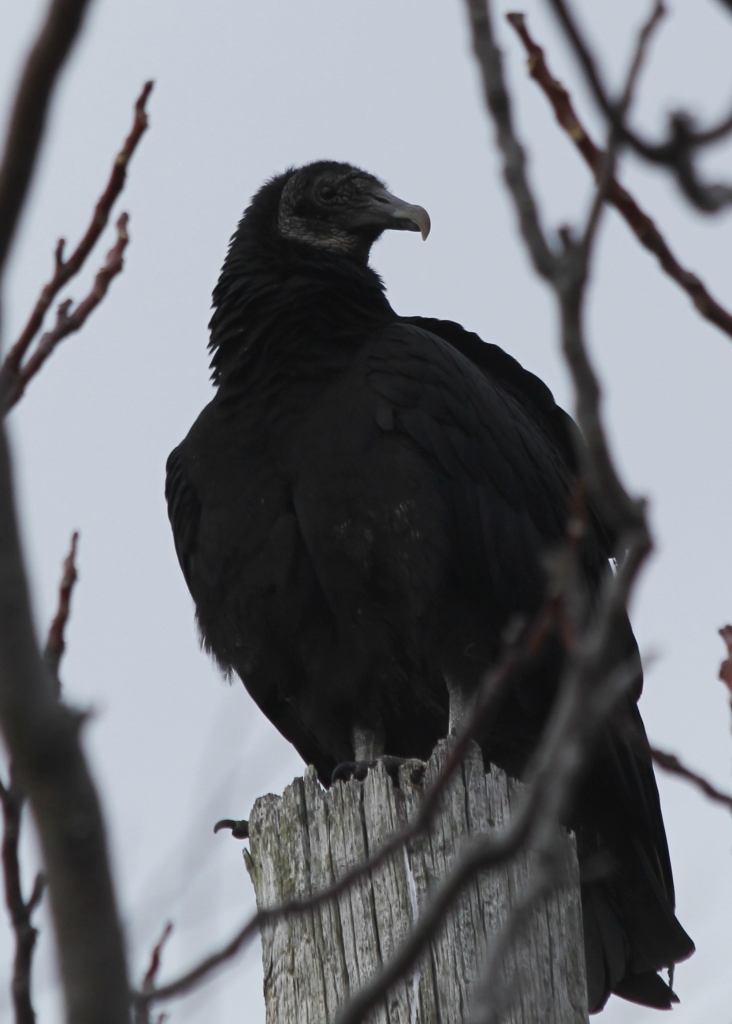 The Black Vulture- dismal or dapper? You decide.

There were a few songbirds along the trail, such as the American Goldfinch, Dark-eyed Junco, White-throated Sparrow and Yellow-rumped Warblers.  Our main objective was to see what was out on the bay, and here we found a number of Horned Grebes and Red-breasted Mergansers, seen in silhouette below with their long, thin bills: 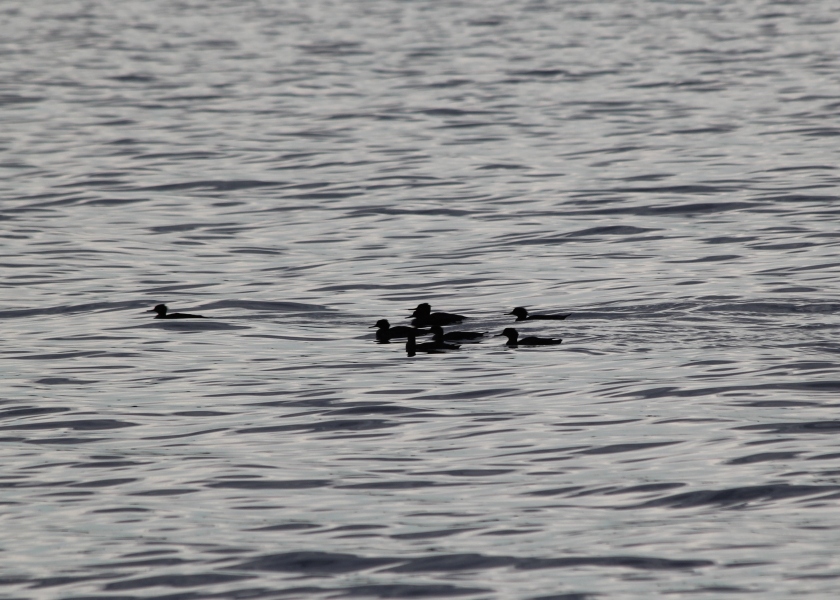 Next we drove to the North Beach, in search of the Northern Gannet, who we hoped to add to our Life List today. Jerry has seen and described the Gannet to us before, but to date they have eluded the Bird Nerds.  We climbed the observation deck near the North Beach parking area, and scanned the massive beach and shoreline.  From here, we saw a large seabird, plummeting into the ocean in search of fish.  It was the Northern Gannet LL we hoped for!  We walked to the water to get a better look, and here we found some adorable Sanderlings snacking and flying along the shoreline: 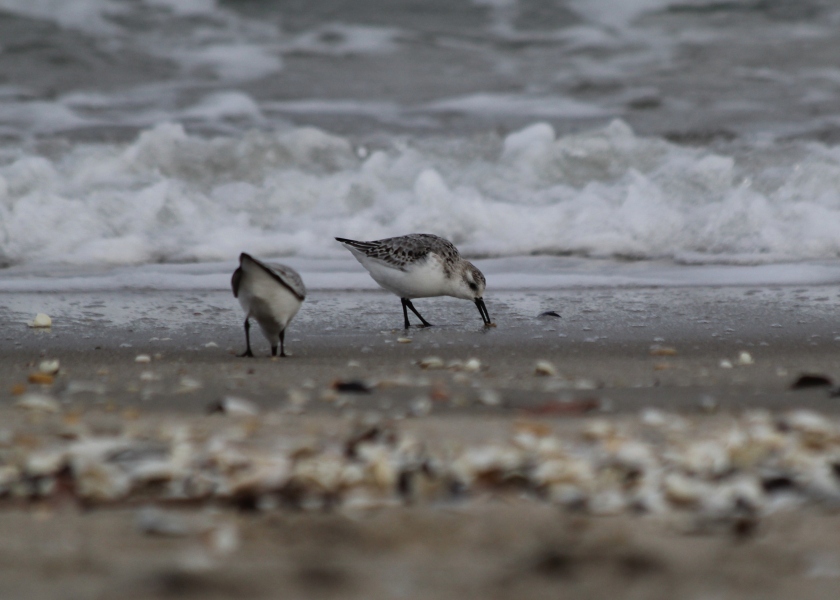 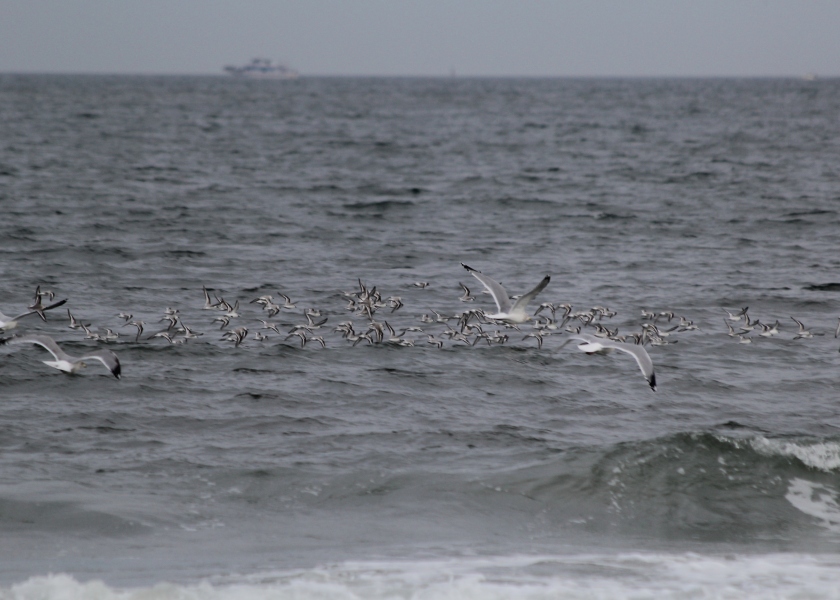 A grain of Sanderlings with some gulls 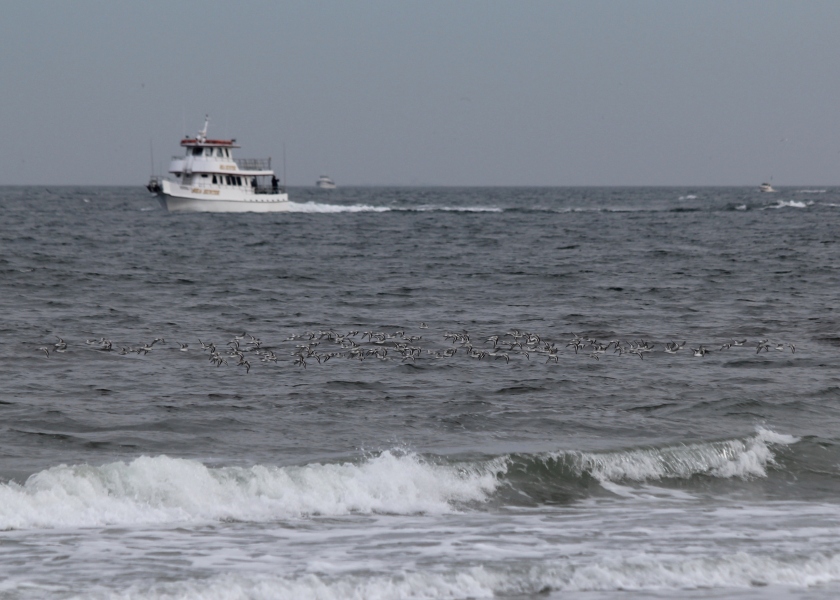 But back to the Gannets.  The Northern Gannet is a special bird.  Although it looks like a gull at first glance, it is actually related to the Booby.  You can distinguish these birds from gulls by their brilliant white coloring and jet black wing tips.  They are also very large, around three feet long with a six foot wingspan.  This bird spends most of its life at sea, only coming to land to breed in large colonies along rocky cliffs.  On our side of the Atlantic Ocean, there are only six established colonies where these bird breed, each along the East Coast of Canada. 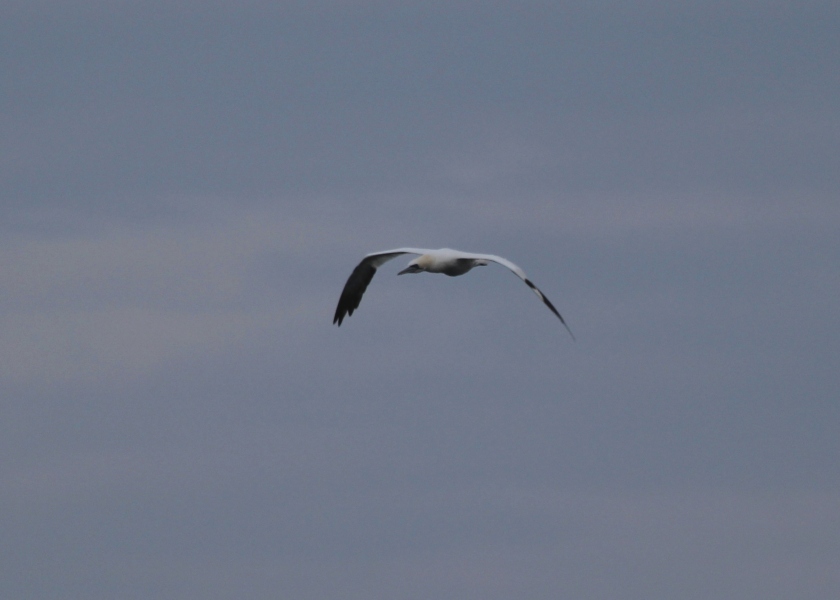 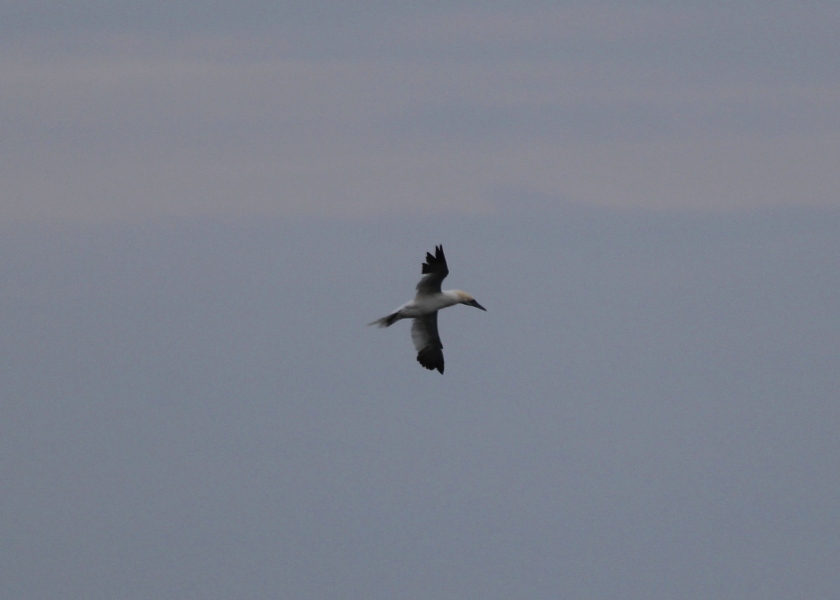 The Northern Gannet spends the Winter fishing off the coast, and it does so in a spectacular fashion. They soar over the ocean until they are ready to dive, then plunge from heights of up to 130 feet in the air, folding their wings back and torpedoing into the water with a dramatic splash.  They are so entertaining to watch we spent a long time on the beach taking in the excitement, here are some of our favorite shots: 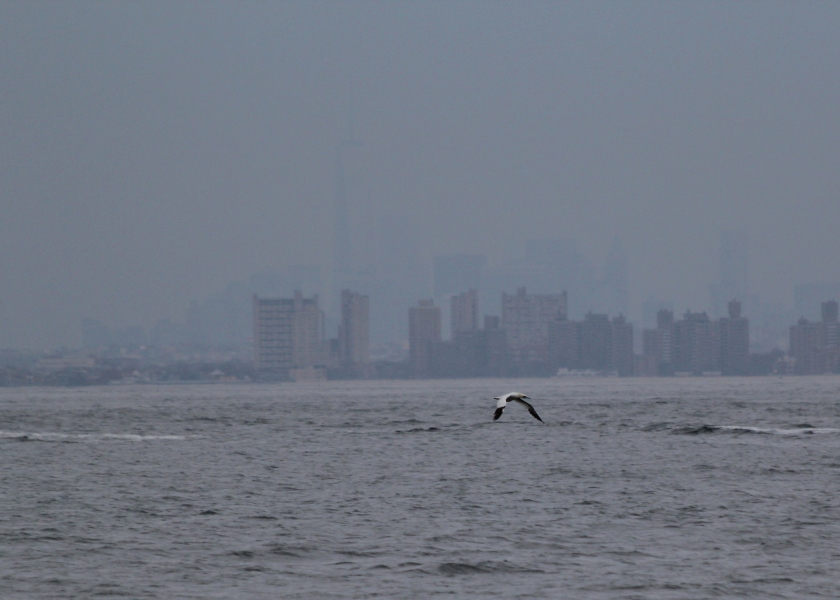 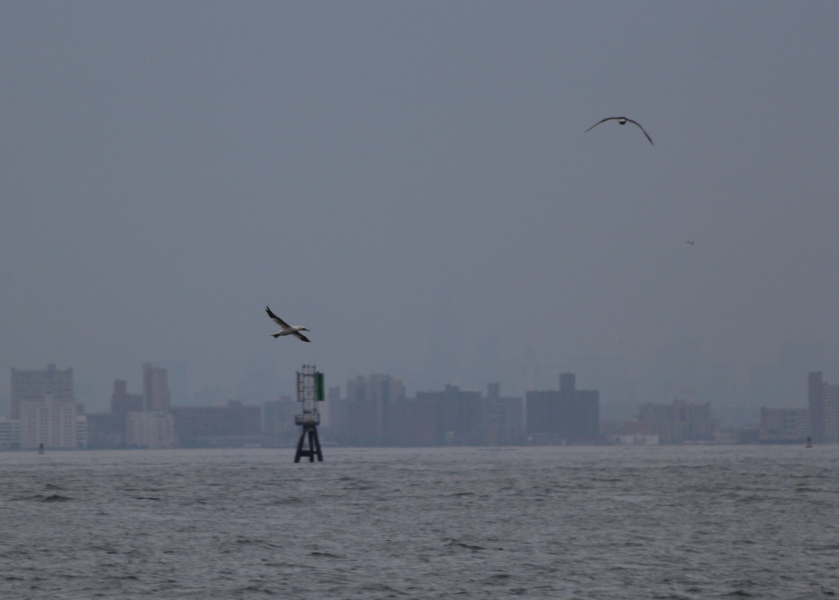 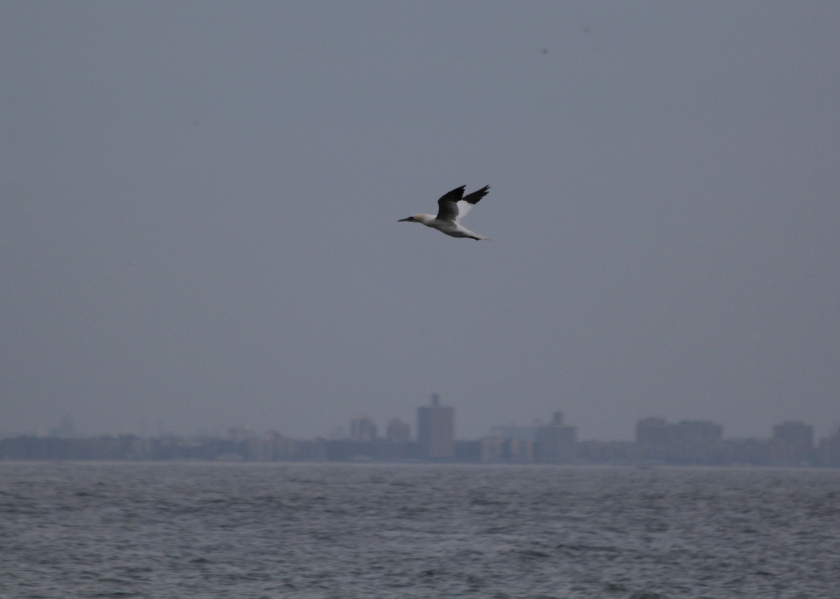 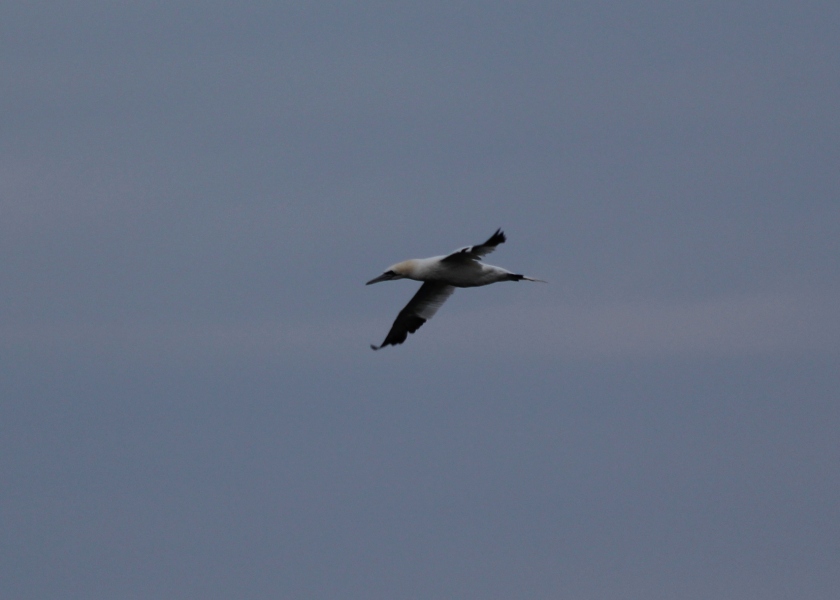 Northern Gannet- note the thick bill and yellow on the face

And look, a curious Harbor Seal in the mix!

Harbor Seal, they seem to find us as interesting as we find them

We left the beach as the sun was starting to set, and had a beautiful view of the Lighthouse.  Another wonderful day at Sandy Hook! 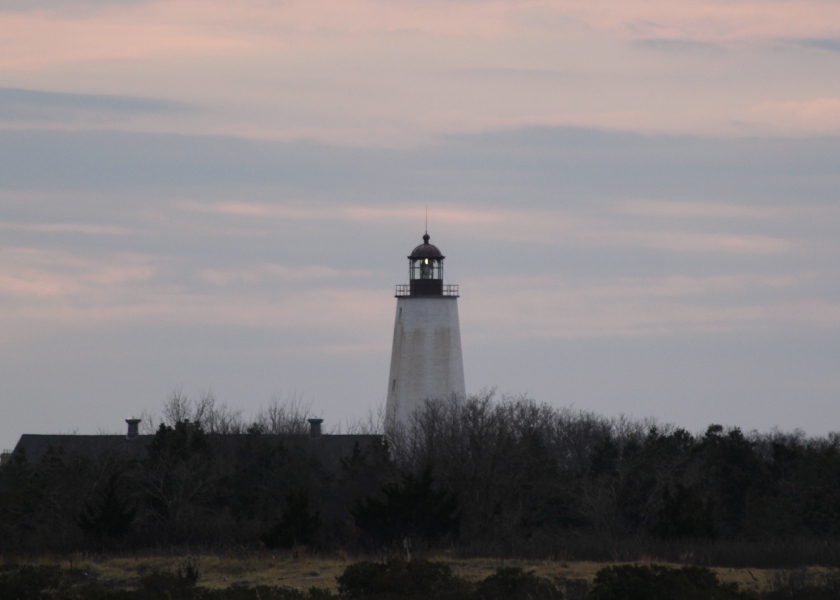 Without further ado, the lists: