We have a book about owl watching that should be summarized in one sentence: “Forget it, you’ll never see an owl”. Despite this thoroughly demoralizing book, we have been trying to see owls for years now. Some owls are active at dawn and dusk, but there is poor light at these times and we would never get a good look, let alone a good photograph to share with our loyal blog readers.

Owls in our area can sometimes be seen during the day, but only if you are somehow able to spot an immobile and perfectly camouflaged object high in a tree. According to our book, the best way to find them is to look for there toothpaste-like poop that builds up below their roosting spots, or to look for the pellets of fur and bones that they regurgitate after snacking on rodents. It turns out the book is wrong. The best way to see an owl is to have someone show you an owl.

Back in April, Tim stopped by Croton Point Park in Croton-on-Hudson, New York to look for Bald Eagles and early spring migrants. He saw a binocular-clad crowd standing around a tree and decided to ask what they were looking at. They pointed high in the tree to a female Great Horned Owl taking an afternoon snooze.

Because of their Great size, Great Horned Owls lay their eggs earlier than many small birds so that the young have a chance to reach full size by fall. This means that while other birds are still trying to woo mates with fancy courtship displays, by April Great Horned Owls have already hatched their young. An owl watcher from the Croton Point Park Nature Center explained that the sleeping female was mother to three owlets, one of which was visible in a nearby tree. 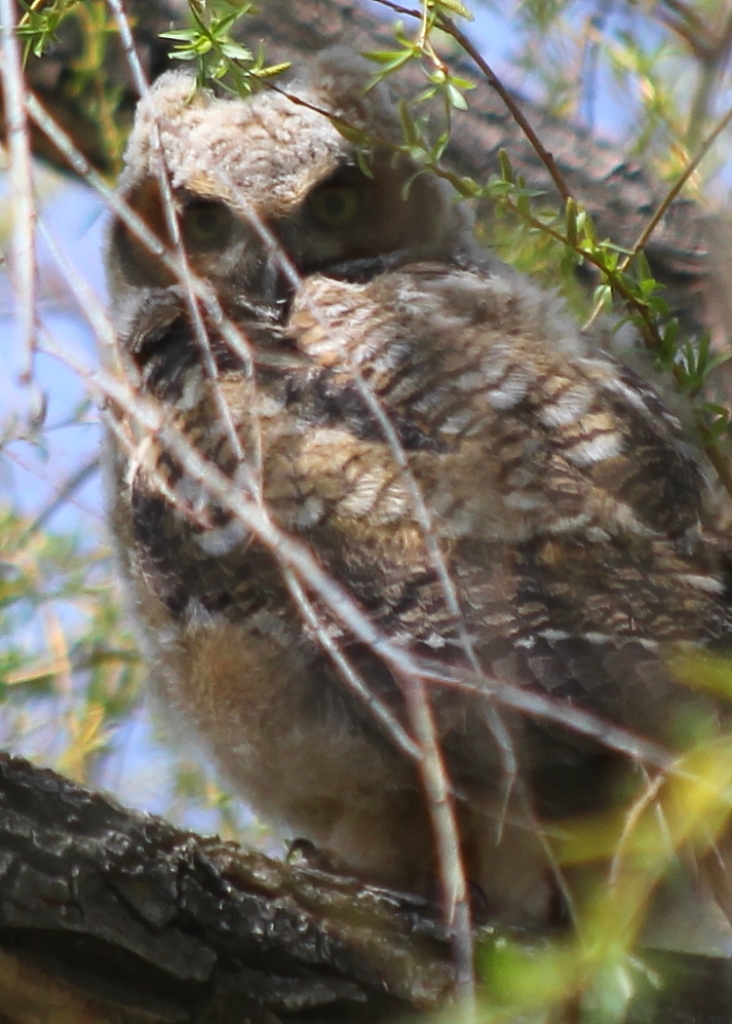 Despite the fact that it could not yet fly, this owlet had busted out of its too-small nest, found its way to the ground, and then scratched and clawed its way to the top of another tree. Its siblings were still in the nest, but not visible enough to merit a photograph. 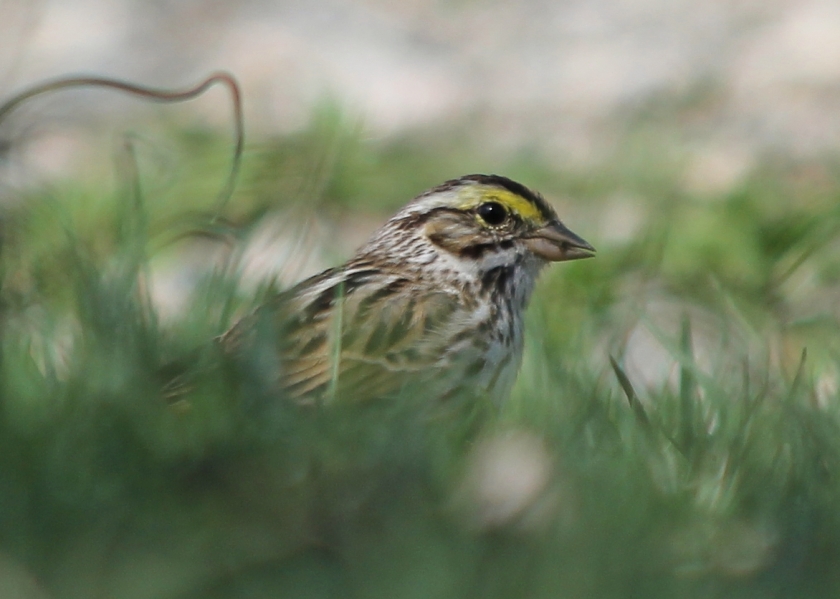 Brimming with excitement, Sarah and Tim ventured out the next weekend to Jamaica Bay National Wildlife Refuge in Queens in search of more owlets. As a general rule, birders do not share the location of owl nests with other birders, to prevent the young from being disturbed. Croton was an exception because the owl nested in a highly visible spot. Because of the nesting gag order, we were only able to ascertain that there was a Great Horned Owl nest somewhere near the west pond at Jamaica Bay. Undaunted, and with our eyes ever-sharp, we set out to look for fluffy blobs in a tree.

While Tim was pursuing a bird that may or may not have been a Carolina Wren, Sarah said “Tim. Owls.” Then she pointed to two fluffy blobs in a ramshackle nest. Tim pulled out the camera and noticed that we had left the memory card at home. Oops.

Tim returned to Jamaica Bay the following weekend with a memory card and a backup memory card, only to find that the owlets had left the nest. Giving up on the owls, he walked to the edge of the marsh to look for songbird migrants, only to find that the Jamaica owlets had also busted out of their nest and found roosts in nearby trees. They didn’t have their flight feathers yet, which means that they were still being fed by their mother, but Tim didn’t spot an adult. That’s okay, because he got a handful of photos of the owlets, which are adorable. 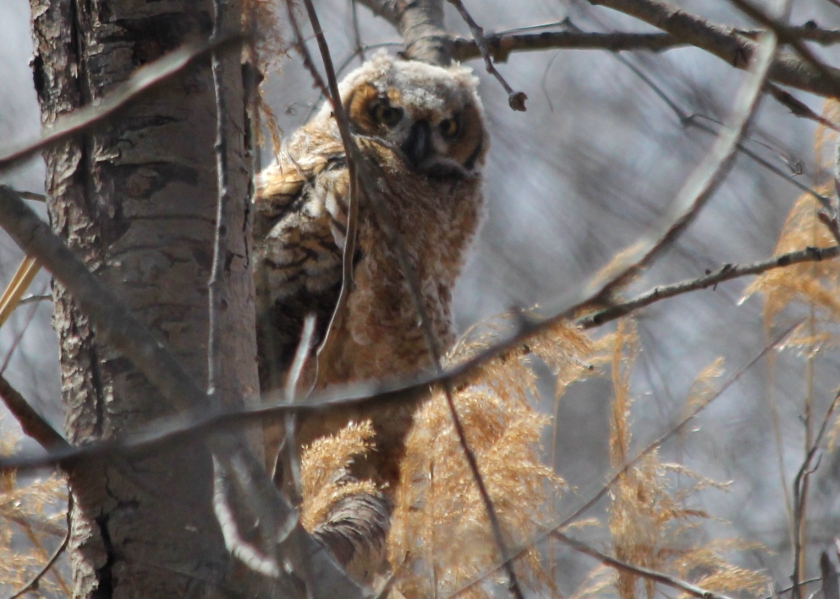 Great Horned Owlet peeking out from behind a tree 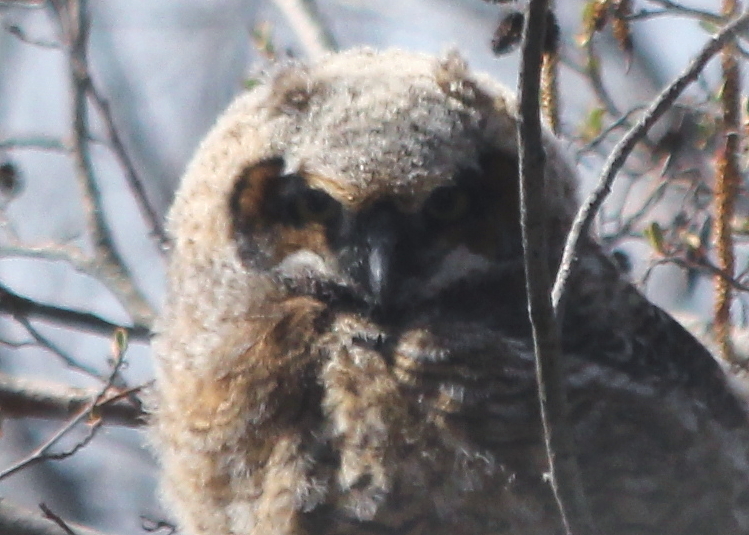 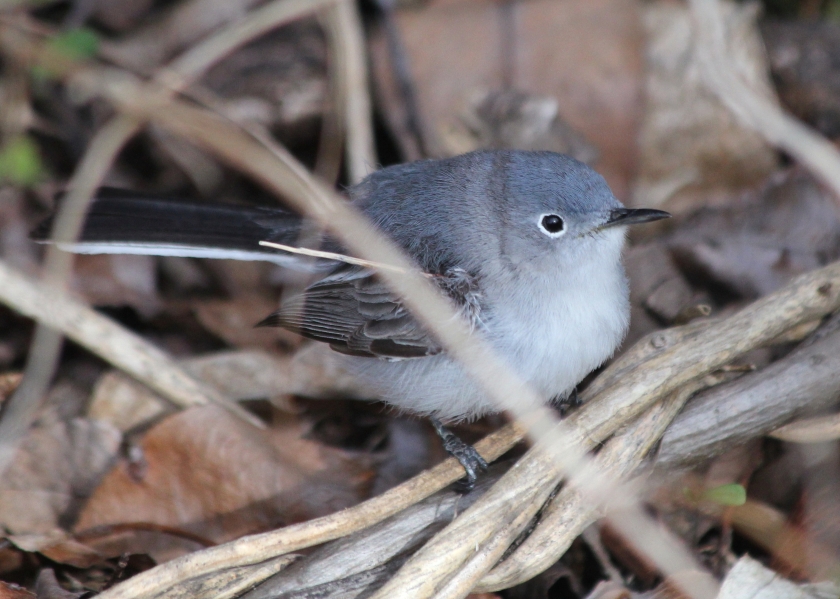 Without further ado: the lists:

One thought on “Owlet You in on a Secret”