Each October, the Bird Nerds and Sarah’s parents spend a long weekend in Cape May, New Jersey, taking in fall migration at one of the top birding spots in the country.  It is one of the highlights of every year, sort of the “Superbowl” of birding. There will be more on Cape May in our next post – but for now we’ll share with you another great birding spot in New Jersey that we visited on the way: Brigantine.  On Friday, October 17th, we set off on the three hour drive from Brooklyn to Cape May.  About 45 minutes north of Cape May, we stopped at the Edwin B. Forsythe National Wildlife Refuge (we just call it “Brigantine” for short, which was the former name.)  This refuge protects 47,000 acres of coastal habitat, both salt and freshwater.  It is surrounded by an eight mile “Wildlife Drive” loop road, so most of the birding is done by car, with a few additional trails for walking. 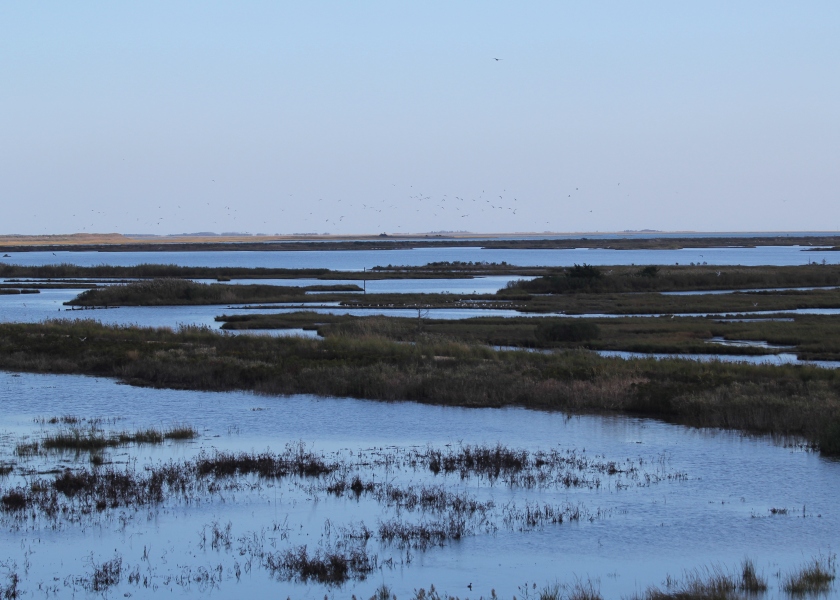 Scenery from the car at Brigantine

It is a beautiful place, and with Atlantic City visible in the distance, a reminder of what the landscape once looked like along Northeast coastline, and how important it is to conserve what is left.

But onto the birds!  Today was egret central at Brigantine.  Everywhere you looked there were groups of Snowy and Great Egrets wading, eating and flying.

Great Egret on the prowl 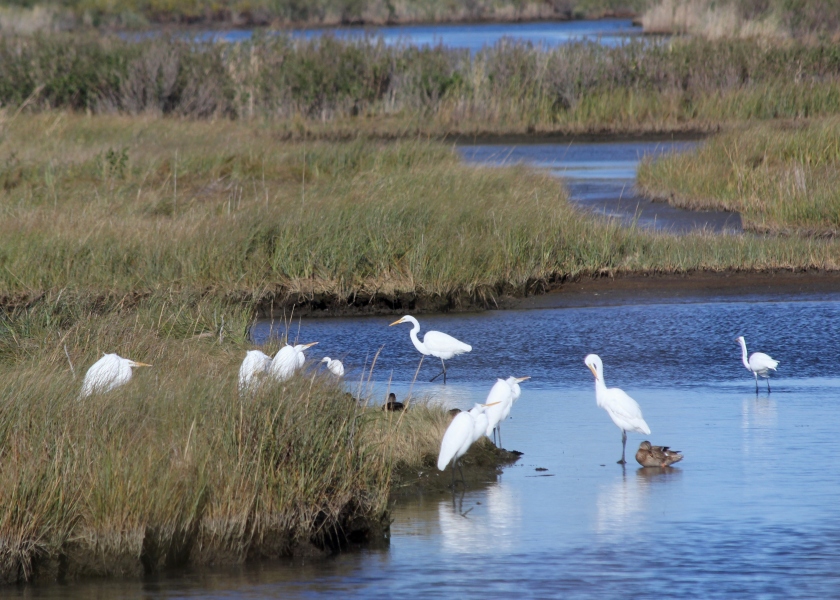 A congregation/RSVP/skewer/wedge of egrets. Turns out there are a lot of collective nouns for this bird!

Besides the egret excitement, we were thrilled to see one of our favorite raptors – the Northern Harrier.  This is an unusual raptor with a disc-like face (similar to an owl) who relies heavily on hearing to capture prey.  They forage on the wing, you can often see them flying low above a marsh, scanning for rodents.  Northern Harriers also have a distinctive white patch on the base of their tail, making them easy to ID.

We also saw other raptors on our drive, like this awesome Peregrine Falcon: 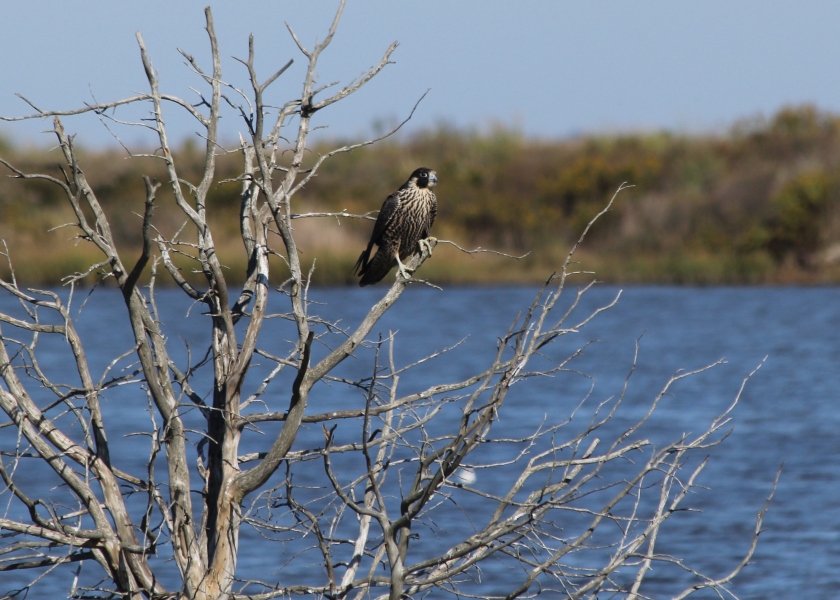 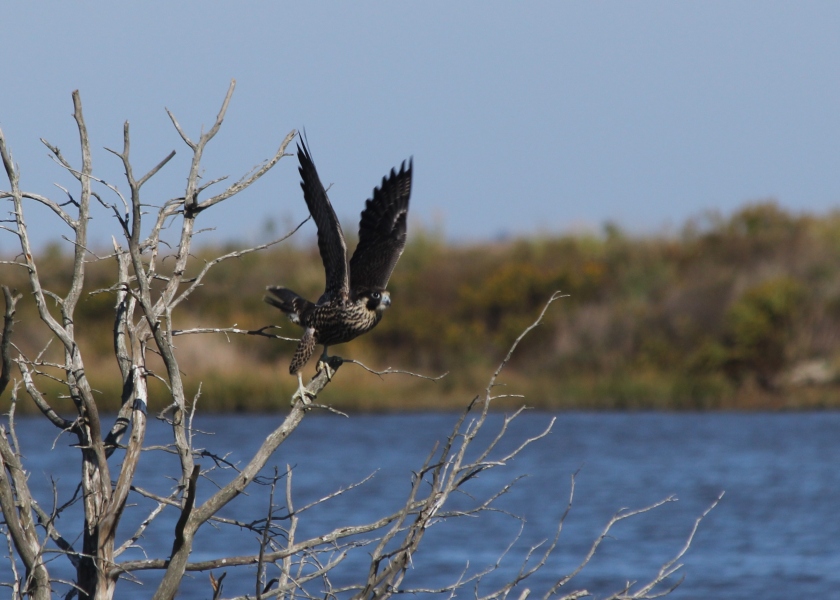 Further along the Wildlife Loop, we came upon on a ternery and saw dozens of Forster’s Terns, sitting on pilings and diving rapidly into the water after fish. 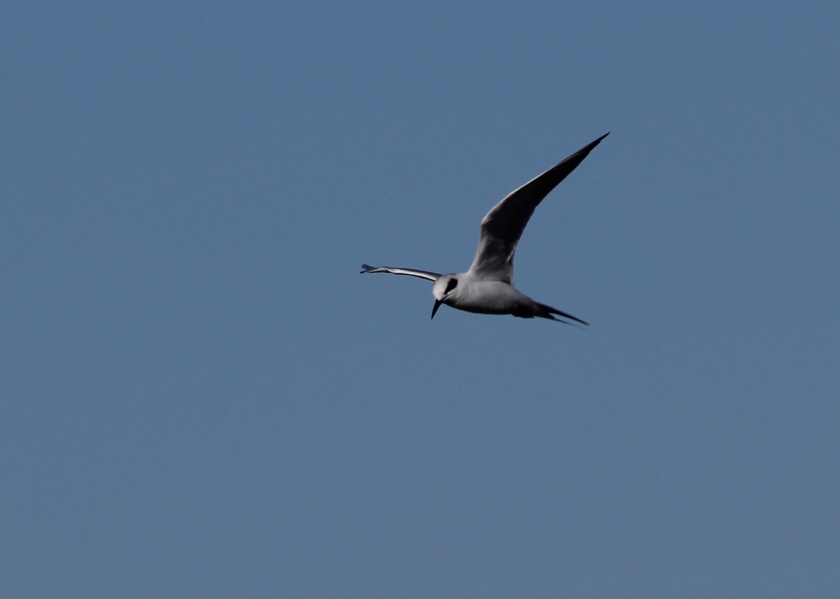 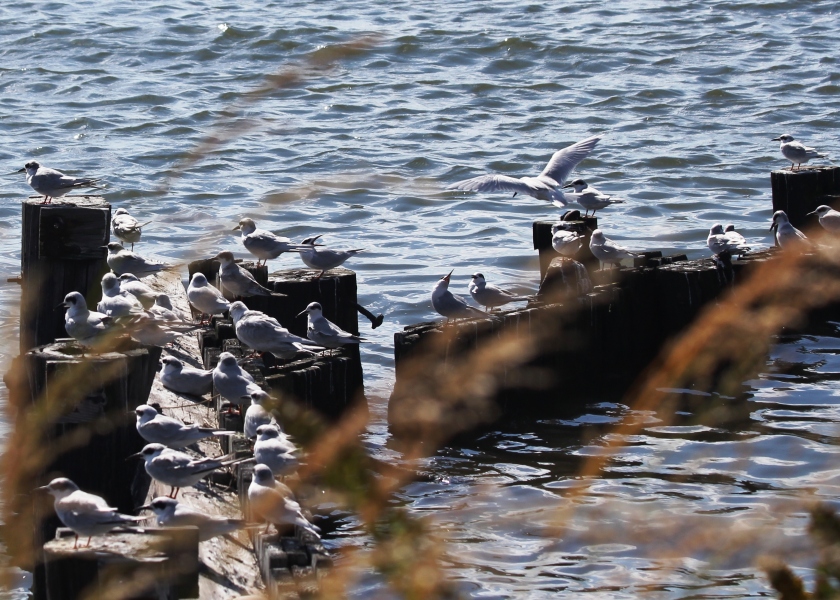 We also spotted our first waterfowl of the weekend on this drive, including the American Coot, the Northern Shoveler and the Blue-winged Teal.

For us the great appeal of Brigantine is the shorebirds.  Where else can you see a Killdeer or a life-lister like the Greater Yellowlegs LL from your car?  (Really, if you know of a place let us know.) 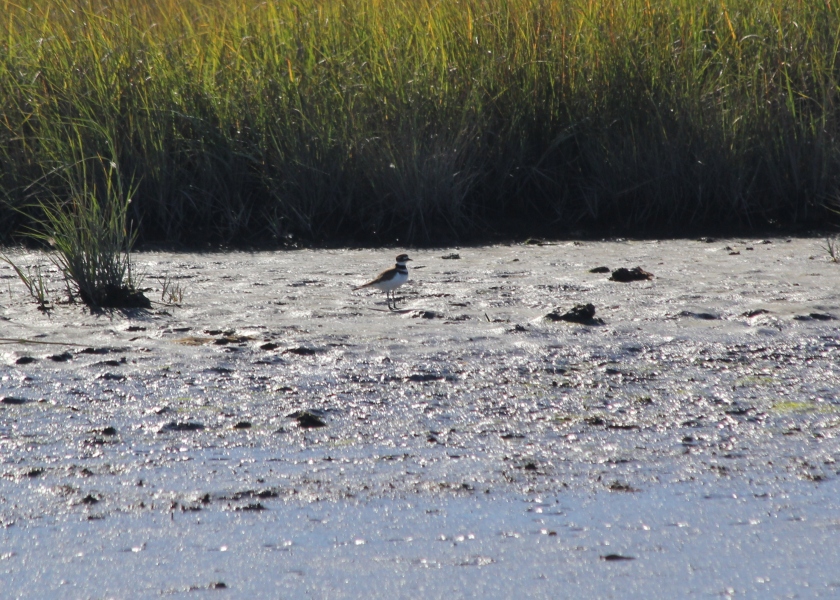 The Bird Nerds were very excited to spot these Greater Yellowlegs and spent a lot of time on the ID.  We often see the Lesser Yellowlegs, which looks almost identical, but smaller. We were able to determine these were in fact the Greater species by the slightly upturned bill, the larger size, and the fact that others added them to E-bird lists in the same spot (always a great help.)

Towards the end of the loop, we parked and walked “Jen’s Trail”, where we saw some song birds like the Carolina Chickadee LL (we usually just see the Black-Capped Chickadee because the Carolina’s range stops in Central NJ), Tufted Titmouse and the Northern Cardinal.

We then continued south to Cape May, which we’ll explore in our next post, but for now, the list: