The Winter of 2014-2015 was the first winter we birded regularly and perhaps the harshest one in recent memory. This meant we were able to add several seasonal visitors (mostly waterfowl) to our life list. We learned that enjoying the presence of these seasonal visitors often involved peering at ducks  200 yards away, with 10-degree wind blowing hard enough to topple and break your spotting scope (which it did in January). While there were a few nice days to bird watch this winter, they only amplified our longing for colorful spring migrants.

We kept a close eye out for reports of early spring migrants, and by the end of March, they were starting to appear at our favorite local spots.  Spring migration peaks in May, but on April 12th, we headed to nearby Green-Wood Cemetery to see the early arrivals. We were not disappointed.

The Belted Kingfisher is an ever-active bird, darting from perch to perch in search of the best vantage point from which to nab a perch (or other fish). This makes them a pleasure to watch, but difficult to photograph. This female stood still just long enough for us to snap this mediocre shot. 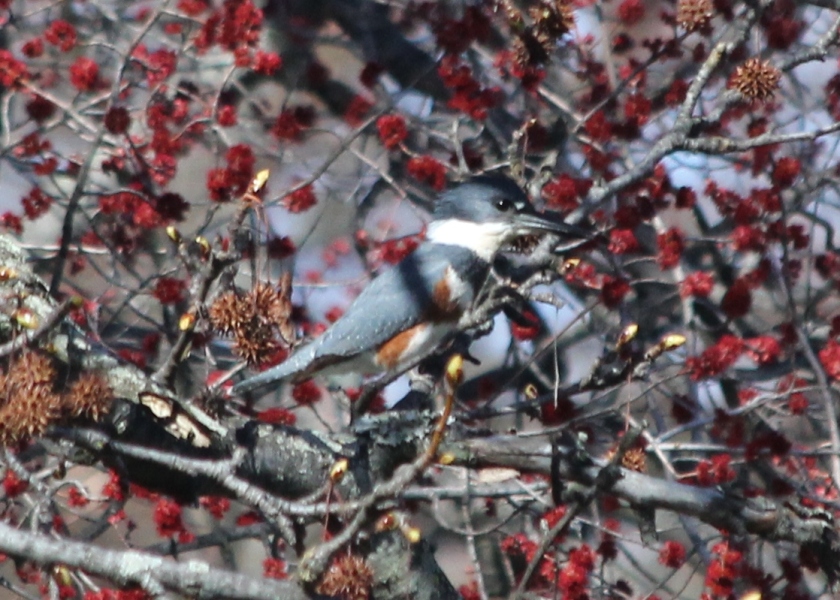 The Belted Kingfisher is one of the few species in which the females are more colorful than the males – males lack the reddish-brown stripes on the chest.

After stalking this Kingfisher around the Crescent Water pond, a fellow birder gave us a hot tip on a migrant arriving a few weeks ahead of schedule.  We spotted something high in a tree that looked interesting, and after climbing to a better vantage point, this White-Eyed Vireo popped out of the Rhododendron bushes directly in front of us.

We saw the White-eyed Vireo last year, but never this close-up, and not with a camera in-hand.  Seeing this bird was an unexpected surprise, but what we wanted to the most were the flagship birds of spring migration: the warblers. We pushed on to new spots within the cemetery in search of these tiny but colorful visitors. We walked to a path where we had seen warblers before, only to spot this juvenile Red-tailed Hawk come in for a landing.

Warblers are a bit small to suit the dietary needs of a Red-tailed Hawk, so we were hopeful that they would not be scared-off.

Even though he was more of a hawk-sized meal, this Rusty Blackbird (LL) wasn’t phased by the presence of the adolescent avivore.

We kept an eye out for a Rusty Blackbird because they weren’t on our life list and we had read reports of them in our area. They are generally unremarkable and look almost exactly like a Common Grackle, so we had a feeling we were overlooking them. We were able to ID this specimen by the hints of rust color on the back, the buff-colored patch above the eye, and its yellow eyes. Now that we have successfully identified a Rusty Blackbird, we never have to pay attention to them again.

Finally, at our last stop within the cemetery Sylvan Water, were were bombarded with warblers. As if from heaven, this Pine Warbler landed about five feet from our camera lens. 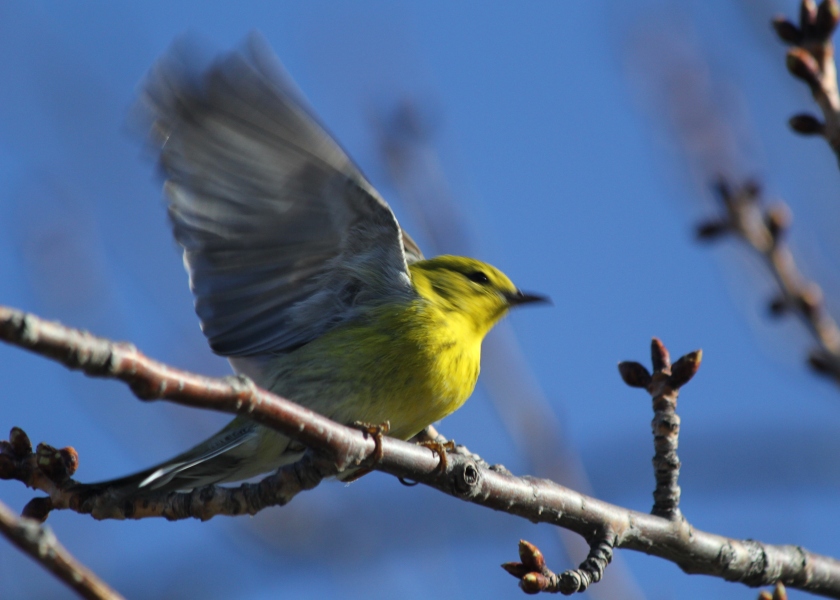 Before we knew it, we were surrounded, and our little yellow friends were everywhere. This one flew so low and close to Sarah that she almost stepped on it.  Then it modeled its hot new spring plumage for the camera.

As many as 35 species of warbler may visit Green-Wood each year, but in mid-April only three intrepid species had made their way this far north. What we lacked in inter-species diversity was partially made up for in intra-species diversity. This bird is also a Pine Warbler, but is much duller than many others – likely a first year female. Being a young bird, she is still in her awkward phase, and does not notice that she has a dead bug stuck to her face. 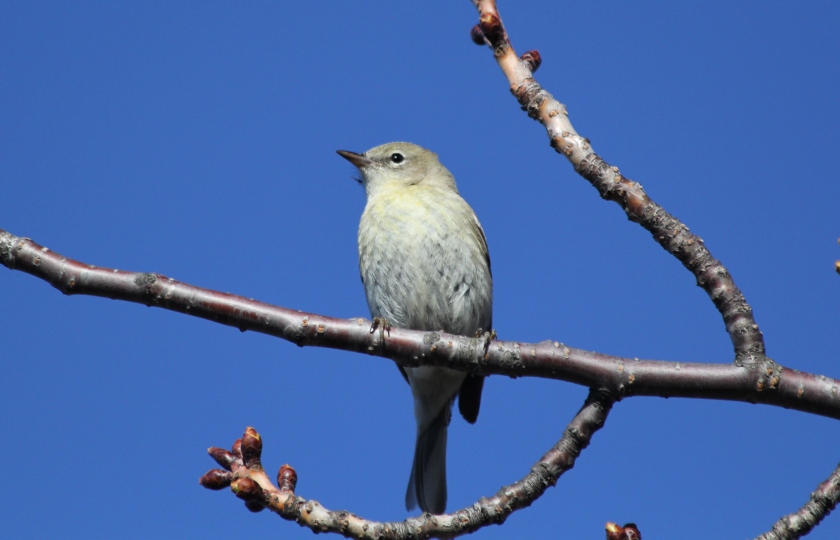 Besides the Pine Warbler, there were also numerous Palm Warblers, including this handsome specimen. 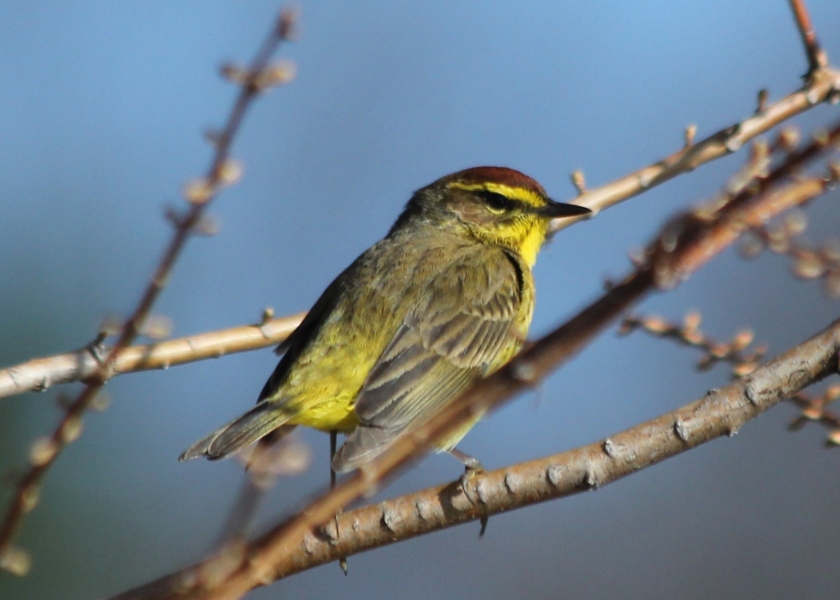 The third warbler species around was the Yellow-rumped Warbler. This is the only warbler that regularly winters in our area, and they are much more common than the Pine and Palm Warblers. But that does not detract from the fact that they are striking little birds.

Our thirst for warblers was quenched, so we began to head home. On our way out, we were treated the closest views we have ever had of our South American friends, the Monk Parakeets of Green-Wood Cemetery. We love these birds because they are exotic, colorful and they look like they have chubby cheeks.  We were lucky enough to see them throughout the harsh winter, flying over us in chattering neon-green squadrons.  Today even the parakeets seemed excited that spring had arrived! 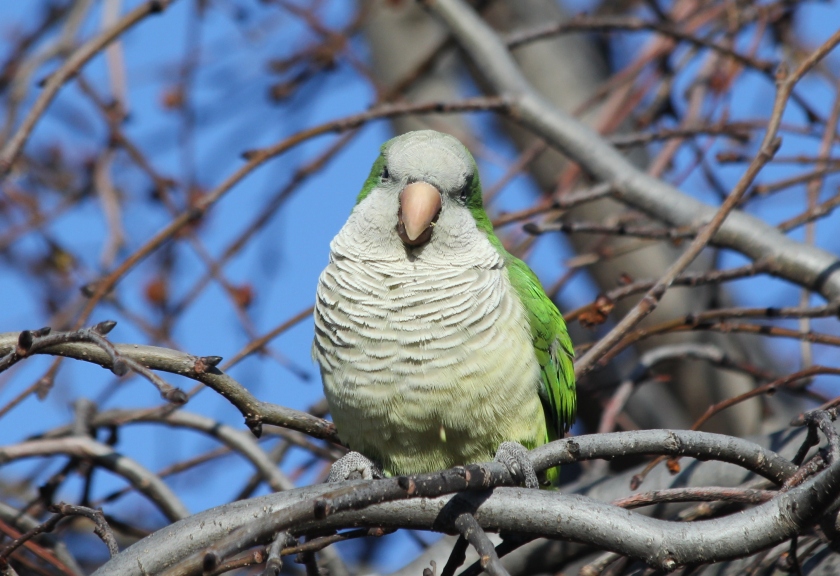 Supper time for the Monk Parakeet