May 11th was Mother’s Day, and what better way to celebrate than to go birdwatching with your mom?  Sarah’s mom Carol is the matriarch of Bird Nerding, she was even engaged at Sapsucker Woods at the Cornell Lab of Ornithology, which is basically headquarters of all birding.

Sandy Hook is a barrier beach peninsula that extends seven miles north off the coast of New Jersey, and is part of the Gateway National Recreation Area.  You may recall from our post on Jamaica Bay National Wildlife Refuge that these natural areas around New York Harbor make up one large park.  We headed to Sandy Hook around 7:30am on what was certainly the nicest day of the year so far.  There wasn’t a cloud in the sky, making the view to Manhattan spectacular:

View of Manhattan from Sandy Hook

We drove towards the end of the point to North Beach, and walked a trail that starts near abandoned military buildings, leftover from when the area was a proving ground in the late 1800’s.  Before starting our walk, we were greeted by a White-Crowned Sparrow perched near the parking lot.  As we learned from Sarah’s mom, Carol, the best birds are always seen in the parking lot. 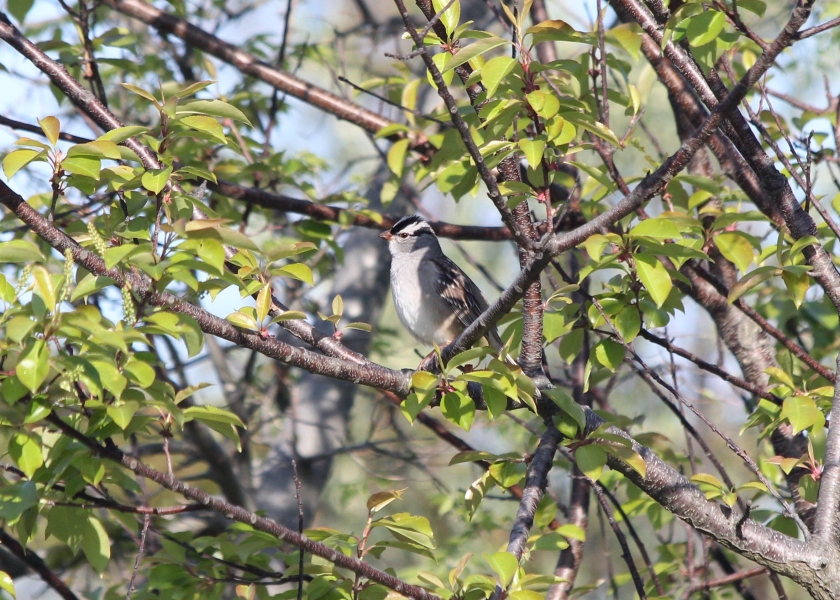 White-Crowned Sparrow.  We told you, don’t ignore the sparrows.

The trail starts in a “maritime forest”, where we heard a beautiful and all too familiar song.  We’ve heard this particular song just about everywhere we’ve been birding over the past few weeks, and can now offer this Birding Tip for Fellow Novices: If you hear a very lovely, extended and variable melody, it is probably a Catbird.  They aren’t colorful, but they can mimic songs which is a cool trait, so I wanted to post a nice picture of one this week:

These birds mimic the sounds of other birds, and string them together to create their own song.

We also found many Warblers in the forest, such as Redstarts, Common Yellowthroats and Black and White Warblers.

The forest opened up onto rolling dunes, covered with many flowering Beach Plum trees that the Warblers really liked.  All we had to do was stand in one spot, and the Warblers would came to us – it was spectacular.  This was the best birding we’d experience all migration season.  Part of the reason is that the sandy soil can’t support very tall trees, so the Warblers are lower and easier to see. 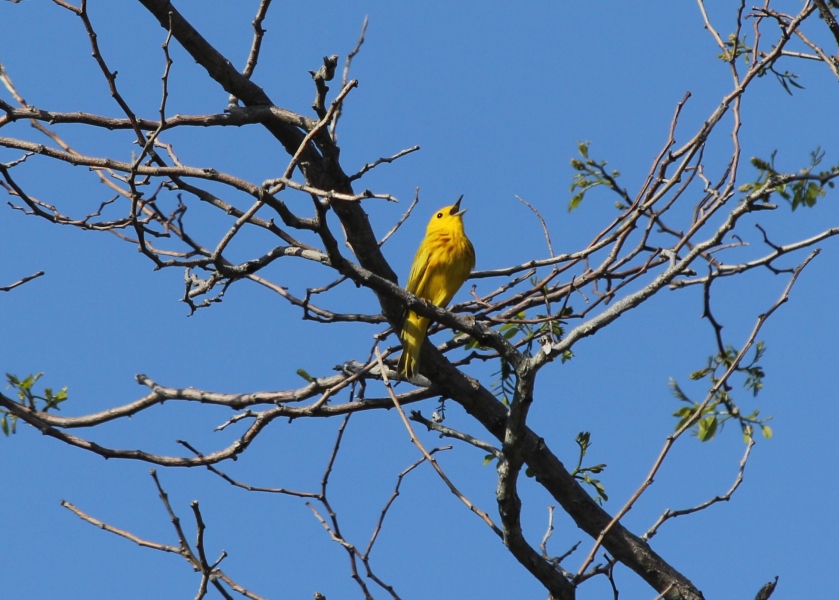 The Yellow Warbler of Seville

We got a quick glance at what appeared to be a new Warbler for us, a yellow bird with a conspicuous black cap.  We looked it up and deduced it must be a Wilson’s Warbler LL, although the guide book said they were uncommon in the eastern US.  We ran into another birder who told us he just saw a Wilson’s, and as we stood on the dune, surrounded by flowering white bushes, a pair of Wilson’s appeared, flying around us and chasing each other into the shrubs.

We continued on the trail through the dunes, always with a view of the NYC skyline in the distance. We got a great look at a Chestnut-sided Warbler – the second look is often as exciting as the first time you see a bird, because you are able to take in more details.

After sitting on an observation deck to rest, we walked down to the beach.  On the way to the beach, we spotted a bird we had seen the day before, but had not been able to identify, because of its lack of distinguishing features.  We nicknamed in the Boring-sided Drab Bird, but after much searching through books and apps, we identified it as the Warbling Vireo LL. Once we reached the beach, we were in an entirely different habitat, which means new types of birds! We’ve been focusing on songbirds this migration season, but shorebirds hold a dear place in our hearts, and Sandy Hook is especially important for these birds. Both Piping Plovers and Least Terns nest here, and are considered threatened and endangered species, respectively. Portions of the beach are roped off to keep the nests safe during breeding season, and volunteers monitor the areas. The New Jersey Audubon Society has some good information on this: 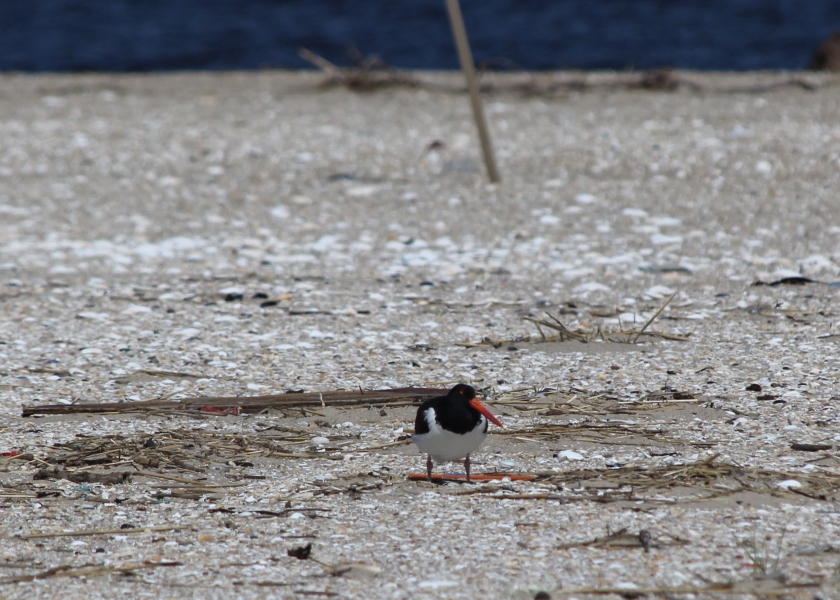 The American Oystercatcher nests at Sandy Hook and its beak matches a Dunkin’ Donuts straw.

At the shoreline we found a little crowd of species, gathering around a prized piece of driftwood.  Including Sanderlings, our first Ruddy Turnstone LL, and a Piping Plover LL, which gets high marks for being adorable. 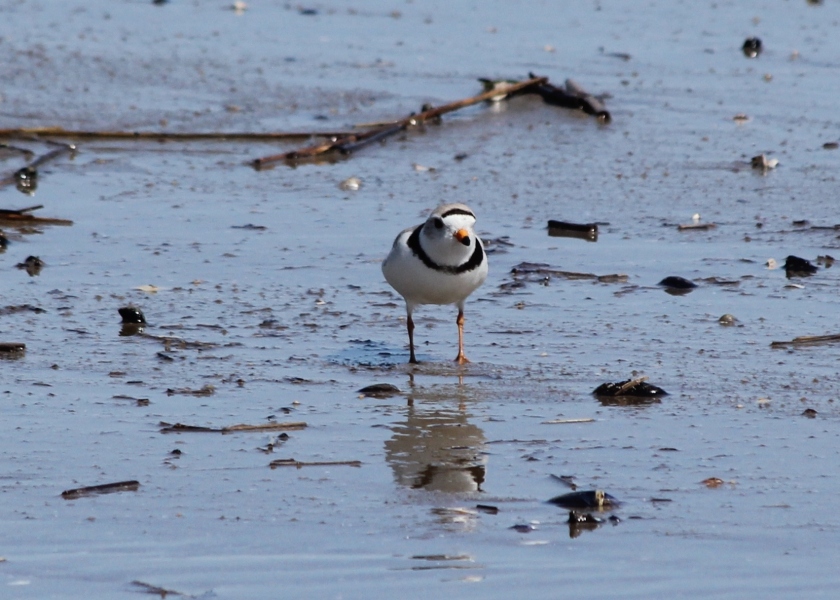 By now we’d seen songbirds, shorebirds, and as the day was warming up, raptors appeared above us! We saw a Bald Eagle, Osprey and Red-Tailed Hawks, among others.

We headed to the car (slowly of course, there were still so many birds to look at!) and decided to stop by the Sandy Hook Ponds before heading out.  These salt ponds are located on the bay side, near the south end of the peninsula, and attract many wading birds.  In the morning we saw the ponds were packed with birds, but by now it was around 11am, and many human visitors and their dogs were out having fun, but unfortunately scaring away the birds.  We did see a Snowy Egret, Brants, Mallards, Hooded Mergansers, and best of all, the Least Tern LL! 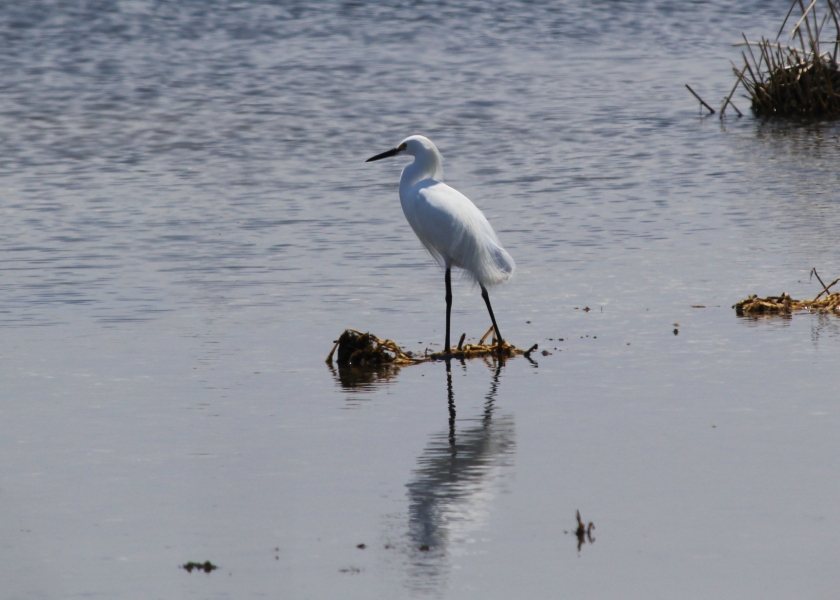 It was a wonderfully diverse day of birding at a very special place.  Anyone who has the chance should visit Sandy Hook.  If you live in NYC, there is a high speed ferry available from Wall Street; it will take about 45 minutes and give you a beautiful ride past the Statue of Liberty and other New York Harbor landmarks. It will run you about $40 round trip, but you can sip wine while sunning yourself on the top deck, and not worry about beach traffic.

And now, the lists!