The bird nerds recently took a summer vacation with Sarah’s parents to Mt. Desert Island, Maine, near beautiful Acadia National Park.  There was hiking, lobsters, kayaking, lobsters, wild blueberries, lobsters and also Puffins! (Followed by lobster rolls.) After a long drive from Brooklyn we arrived at the house Sarah’s parents rented in Bass Harbor.  The house was situated looking southwest to the ocean (via the Blue Hill Bay), and we could see hundreds of colorful lobster buoys and various islands.   We took a walk down to the rocky beach and spotted our first bird of the trip flying low across the water- a Black Guillemot (LL).  We saw many of these striking little birds during the trip, they are easy to identify because the bright white spot on their wing is very visible when they are in flight. 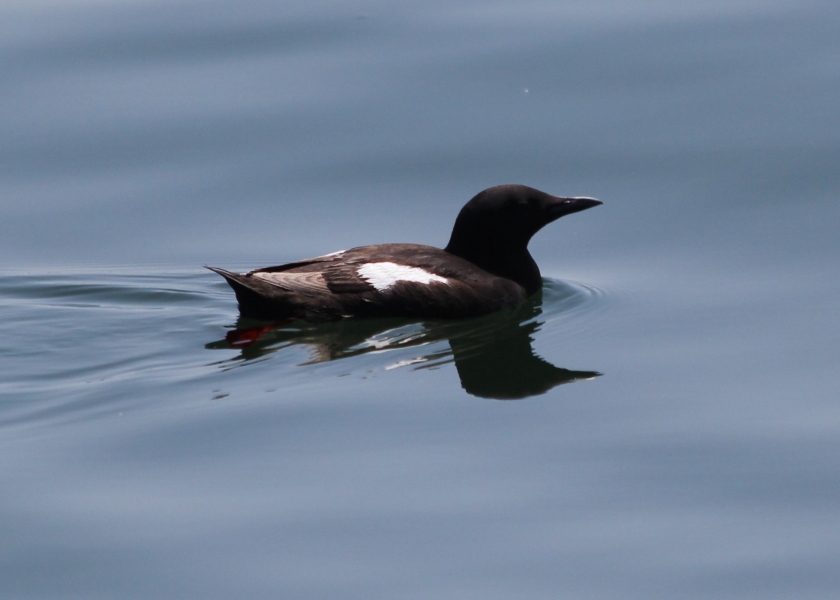 Black Guillemot, about the size of a pigeon

When we weren’t lounging on the deck, watching American red squirrels happily collect and endless stream of peanuts left for them by Sarah’s dad, we spent time walking area  trails. 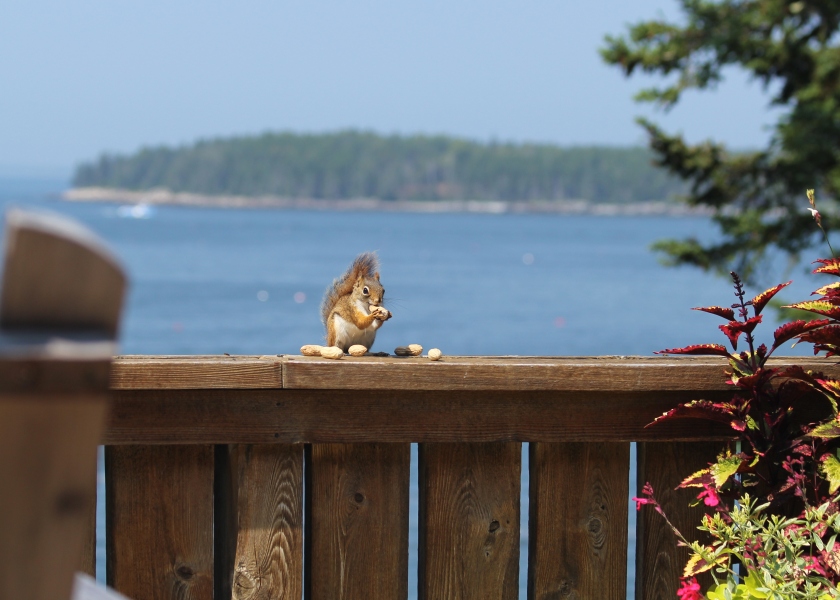 For our first formal birding excursion, we decided to hike the Wonderland Trail in Acadia National Park. The trail is about three-quarters of a mile long and takes you through an evergreen forest before depositing you on the rocky shoreline of the Atlantic Ocean.

This part of Maine is far enough north that some of our favorite warblers are spending their summers here.  As such, we were able to catch up with a few birds that can only be seen in Brooklyn during migration.  As we made our way to the shore through a forest of fir trees, we had the pleasure to view Black-throated Green Warblers, Northern Parulas and a Canada Warbler. 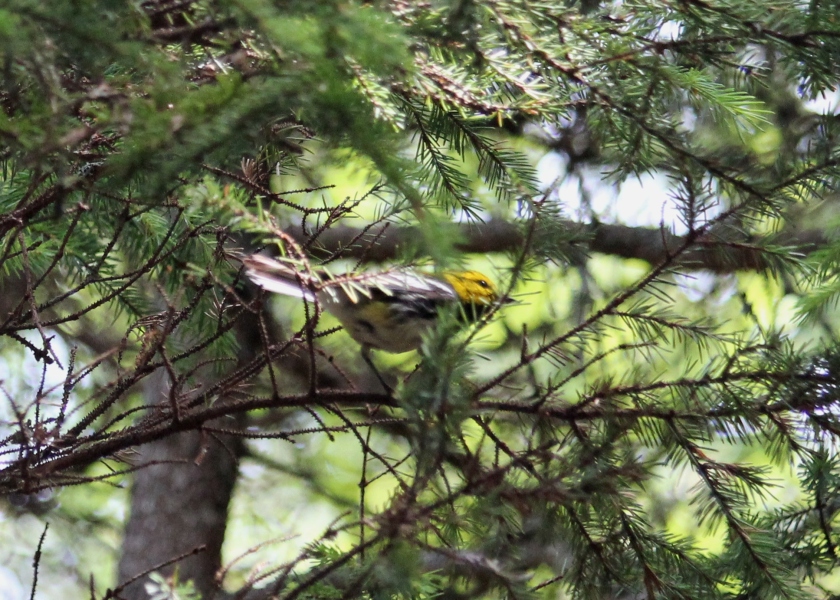 We also spotted a female Purple Finch (LL) and a Pine Siskin (LL), but weren’t fast enough with the camera to snap any usable photos, so you’ll have to take our word for it. 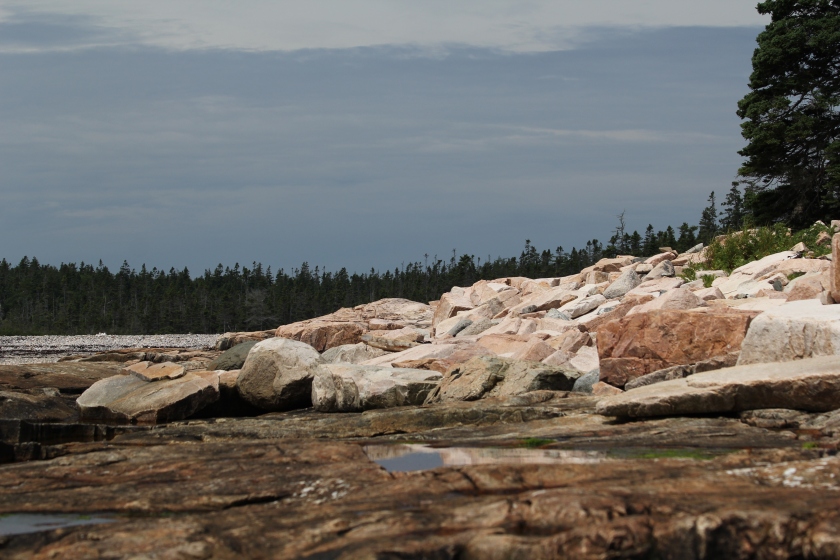 At the end of the trail, the evergreen forest suddenly gives way to the rocky shoreline. The heavy wave action along the coast in this part of Maine washes sand away, leaving behind slabs of exposed granite along the shore.  A 14-foot tidal surge heaves water over the rocks and leaves behind tidal pools filled with colorful (non-avian) organisms when it ebbs. 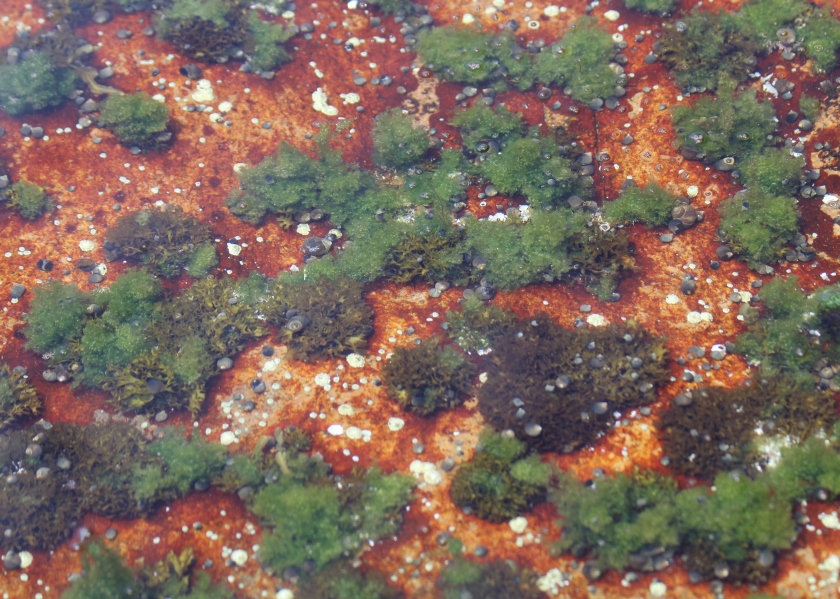 As interesting as the tide pools are, they can’t compare to birds.  The first thing we spotted on the water was a raft of female and immature Common Eiders (LL).  These seafaring ducks are renowned for their down, which fills the finest pillow and sleeping bags.  They also have kind of oddly shaped foreheads. 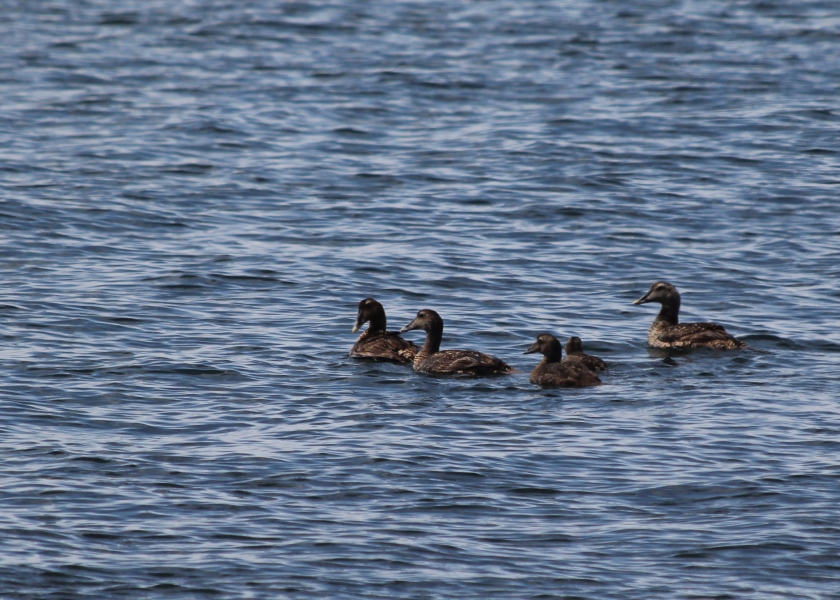 A raft of female and immature Common Eiders.

Other than the eiders, there wasn’t much action on in the water.  However, we did get to add a photo to our ongoing series of “gulls eating things”: 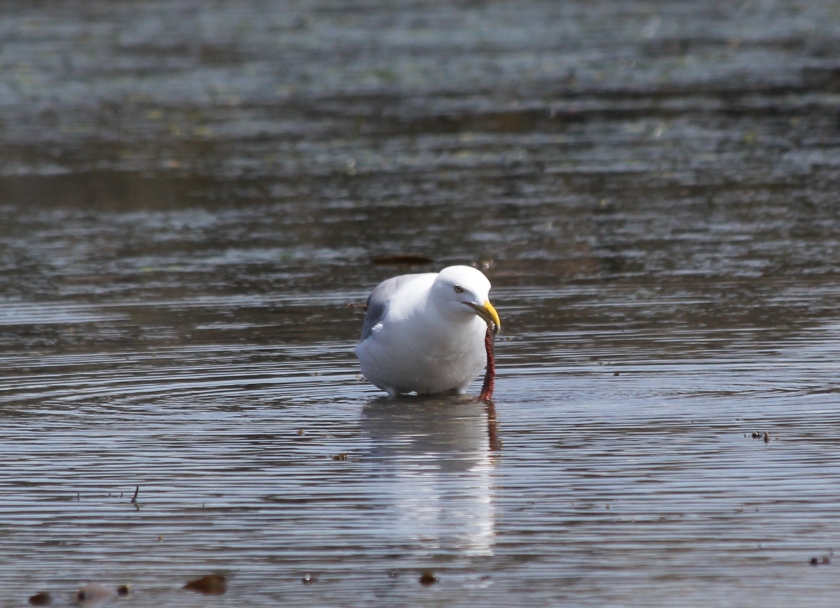 After watching this gull eat what was no doubt some delicious kelp, we decided it was time to head back.  (Actually we started to pity the non-birders in our crew, who normally  would not  take 2.5 hours to hike less than a mile.)  On the way out, we heard then saw a Song Sparrow singing in a beach rose bush.  We see song sparrows almost everywhere we go, but they are one of Tim’s favorite birds, and therefore blog worthy. 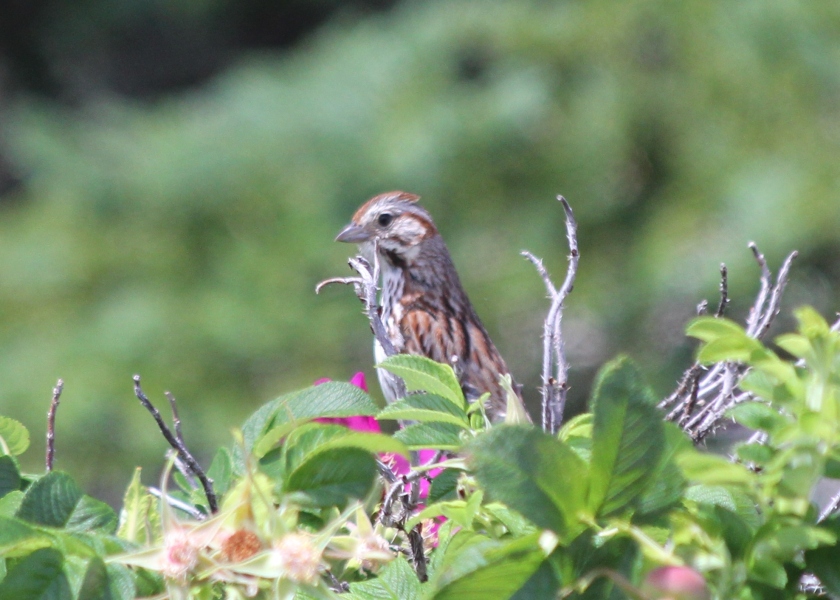 We didn’t see a lot of birds on this outing, but we got a bit of a late start so the birds may have been having a siesta. Regardless, this trail is beautiful and an easy hike to get you started in Acadia National Park, plus we added some new birds to our life lists.  And we saw more of these adorable American red squirrels. 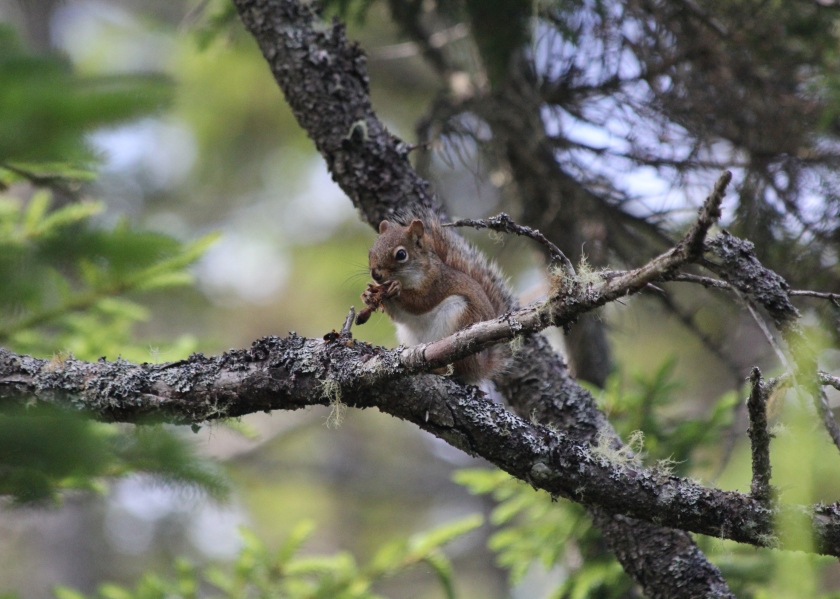 Up next, our Puffin excursion!  But for now, the list: